← more from
MINUS ZERO
Get fresh music recommendations delivered to your inbox every Friday.

If Wolves Could Buy CDs

by Steel, Skin and Bamboo 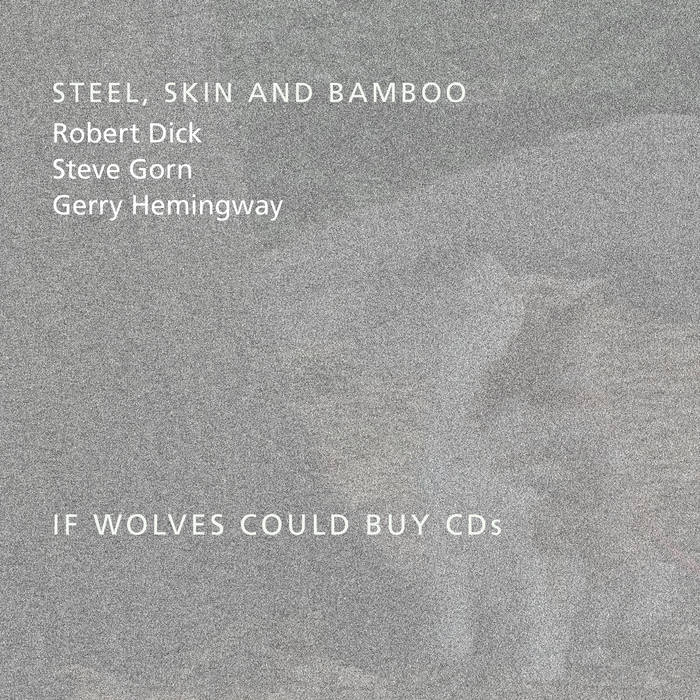 Sailor Dog Where acoustic/world drone and free jazz meet in a beautiful place for a good cause. Very precise music making.

Steel, Skin and Bamboo began its musical life as Steel and Bamboo, the flute duo of Robert Dick and Steve Gorn. The name came from the unique steel flute that Robert played in the 1980 and 90s (and still does on occasion) and Steve’s bamboo Bansuri flutes. Robert and Steve first played together in an interactive electro-acoustic piece by David Behrman and so enjoyed the experience that they continued as a duo, creating their music through improvising and composing. Their mix of furthest out contemporary flute and North Indian Hindustani flute playing melded together in a magical way that transcended overlay and generated an entirely new musical DNA. Robert and Steve played a number of duo concerts in New York City and the Woodstock area, and released their duo CD Steel and Bamboo in 1993 on OO Discs. In 1996 or 1997, Gerry Hemingway joined the project and the trio, renamed as Steel, Skin and Bamboo, debuted on Thomas Buckner’s Interpretations series at Merkin Hall. On October 25, 1997, the three were in Acoustic Recording in Brooklyn and recorded this music — titled If Wolves Could Buy CDs. Given the very difficult to categorize nature of Steel, Skin and Bamboo’s music, this recording didn’t find a label home when it was made, and is heard here for the first time — to the joy of Robert, Steve and Gerry.

MINUS ZERO Recordings:
ALL PROCEEDS DONATED TO PLANNED PARENTHOOD
minuszero.bandcamp.com/music

Bandcamp Daily  your guide to the world of Bandcamp

Bonobo stops by to talk about his new record Fragments